This Two-Year-Old Has Got a Friend in … Southwest Airlines

A two-year-old’s Buzz Lightyear toy traveled by plane to infinity and beyond this past weekend. The Davis family was on their way to Dallas, Texas to visit family.

The Davis family packed their son Hagen’s favorite Buzz Lightyear to help ease the stress of travel. After their arrival at the Dallas Love Field airport, they rented a car to set off on their next part of their journey. It was in the car that they realized their son’s beloved toy was gone. 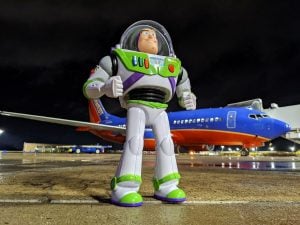 Ashley, the boy’s mother, looked into reporting the toy as lost. She quickly realizes the cost of reporting a missing object was about equal to the price of buying a new toy. The family lost hope and declared Buzz Lightyear as a lost cause.

The Davis family had chosen Southwest Airlines for their first flight. The busy airline had already departed to Little Rock, Arkansas by the time they noticed the toy was missing. Fortunately for the boy, a Southwest Airlines ramp agent named Jason, found Buzz Lightyear and discovered that Hagen had written his name on the toy’s foot, just like in the movie. Jason managed to track down the only passenger from the previous flight named Hagen.

Although many toys and belongings get left behind on airlines, this was a special occasion.

A week after losing his beloved toy, Hagen received a decorated package in the mail complete with photos of Buzz Lightyear, a note, and of course, the toy. 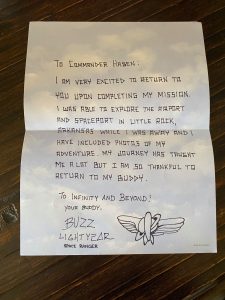 The Davis family was so touched by Jason’s effort to return the toy that Ashley shared the story on Facebook.

“The thought and care he put into getting Hagen his Buzz back when Hagen left him on the plane in Dallas was beyond thoughtful and sweet, it will be a memory he has to cherish forever and an incredibly cool story to tell as he gets older.”