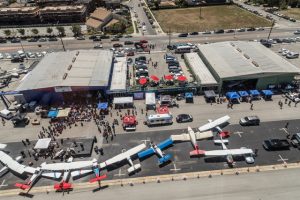 After you read our news about fully electric aircraft new questions may rise – how will the airports be able to provide “fuel” for all of the electric aircraft to be released to the market in the next decade? What is the best way to charge that type of aircraft? Compton, California-based Tomorrow’s Aeronautical Museum (TAM) has an answer for you! They are indeed taking big leaps towards the technological process. TAM is located at the Compton-Woodley Airport and not so long ago the airport announced that they are installing charging stations for its electric trainers on the field and beyond.

TAM embraced the electric aircraft charging technology over two years ago and has been perfecting it since. Now we can finally see the results of their hard work. The charging ports are made to charge TAMs Pipistrel ALPHA Electro aircraft – a two-seated, 85-knot cruise airplane specifically designed for training. One docking system can charge the batteries of two ALPHAs simultaneously and under 45 minutes. A fast-charging cycle like this one will help support flight training operations at Compton-Woodley. One full charge allows for one hour of flight time with a 15-20 minutes reserve time.

TAM has planned to install more charging station all over the US to enable cross-country flying. They are planning to start from the Los Angeles area, beginning with San Gabriel Airport in El Monte. They stand behind the idea to create a cleaner environment for flight training as more fully electric aircraft are added to their fleet.

“We’re setting up an electric grid. Once we get the FAA approval, we’ll offer lessons from $90 per hour per person within the grid,” said Robin Petgrave, founder of TAM.

At the moment their training program sounds pretty great for anyone who’d like to learn how to fly. It’s greatly reducing the price of flight training courses and making the environment safer for everybody.

Norfolk Aviation always covers the latest news in the industry. If you want to see how the situation with electric aircraft is unfolding further, be sure to follow us on Facebook and check our latest news page. Meanwhile, why not take a look at some of the great aircraft we have for sale?