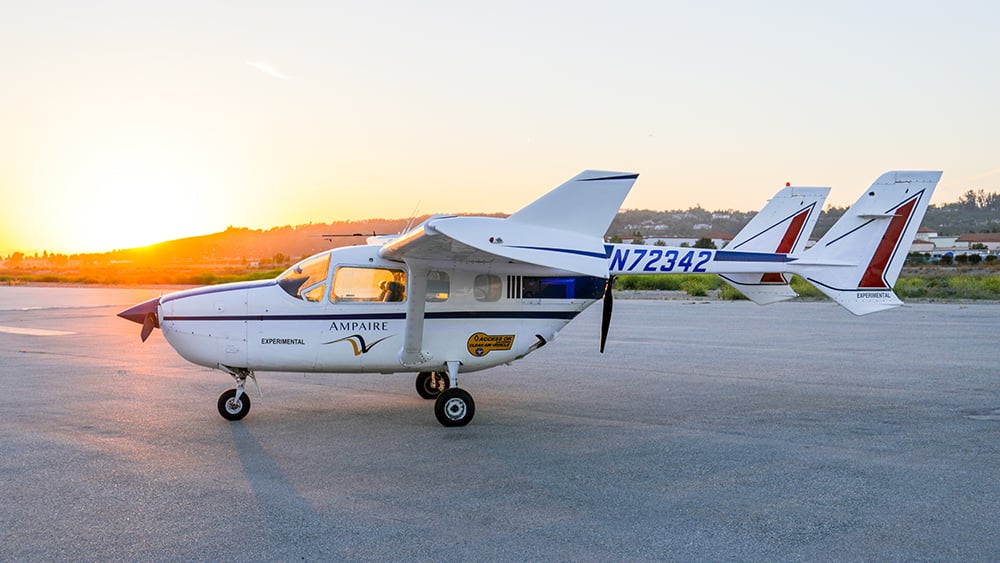 “The mission was a quite normal cross-country flight that we could imagine electrified aircraft making every day just a few years from now,” Gillen said.

After four weeks of flight testing in the Camarillo area for the second Electric EEL aircraft, this flight was finally ready to take place. The testing included over 30 hours during 23 flights in 28 days, with a 100% dispatch reliability.

“Our success in taking this aircraft in a short period from the test environment to the normal, everyday operating environment is a testament to our development and test organization, and to the system’s maturity we have achieved with our second aircraft,” said Ampaire General Manager Doug Shane. “The ability to put innovative electric technologies into the air rapidly in order to assess and refine them is central to Ampaire’s strategy to introduce low-emissions aircraft for regional airlines and charter operators within just a few years.”

The Electric EEL that made its way to Hayward is named the Hawai’i Bird because it will be taking part in demonstrative flights with Mokulele Airlines on short-haul routes to help define how airlines and airports can adopt electric aviation. These demonstrative flights will also be the first time an electric aircraft has flown under an FAA “Market Survey” experimental aircraft certificate.

The EEL can generate fuel and emissions savings up to 50% when the electrical propulsion unit can run at higher settings, and generate savings of about 30% when run at lower settings.

“The Electric EEL is our first step in pioneering new electric aircraft designs,” said Ampaire CEO Noertker. “Our next step will likely be a 19-seat hybrid-electric retrofit program that will lower emissions and operating costs, benefiting regional carriers, their passengers, and their communities.”

With funding from NASA and others, Ampaire is currently in the middle of design studies for an aircraft much like that one.

Norfolk Aviation is your trusted destination for the latest news in aviation! We’re not your typical part-time or hobbyist aircraft broker. With our dedicated team of experts, we can also help you buy or sell your aircraft at the best prices. Contact us online or give us a call today!

Piper has teamed up with four new brand ambassadors bas ...

A six-seat Cessna 337 twin-engine with an electric moto ...

Like many industries, aviation is one that tends to be ...

There’s been discussion as of late on the most effectiv ...

Everyone is familiar with using GPS, or Global Position ...