Aviation Overland Adventures: The Journey of a Lifetime 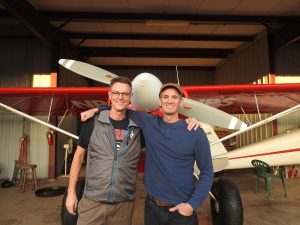 Trey Brewer and Shiloh Dudley pose before embarking on their cross country flight.

When Trey Brewer and Shiloh Dudley took off from St. Augustine, Florida, Friday morning March 23, 2018, they knew they were in for the adventure of a lifetime.

The buddies knew instantly that they wanted to share their experience with the world.

In order to reach the general public, the pair of friends created Aviation Overland Adventures, a YouTube channel where they plan to document their three-week trek of about 4,000 miles all the way from Florida to Alaska in Dudley’s 1998 American Champion Scout.

Their goal is to inspire others to take life-changing trips like this one, and to encourage those who have always dreamed of learning to fly to finally make that trip to the airport.

“The United States has one of the finest airspace systems and infrastructures in the world, and people should take advantage of it,” stated Dudley, a professional pilot and CFI at Florida Aviation Career Training who has logged around 3,500 hours. “Public airports, accessible to most small aircraft, are reasonably close to almost every small town in the country. If you have an aircraft equipped for landing off-airport, then the possibilities are endless!”

“The views of North America taken from the air are second to none,” he says. “While this type of flying is by no means new, it is fairly new to us. We are confident that we will be learning something most every day and look forward to sharing tips along the way.”

According to videos posted to their YouTube channel before the flight took place, they plan to share “the good, the bad & the ugly” of their exciting trip.

Their only set-in-stone plan is to stop off in the music capitol of the US, Nashville — Both friends are talented musicians — the rest of their trip will be planned by the day.

“Part of the beauty of it is we don’t really have it planned out,” said Dudley. “How many stops we have and where we go is largely influenced by our whims and the weather, so we’re a bit unsure ourselves where we’re going to end up. We’re pretty excited about that.”

The pair plan to stop at various points of interest along the way, showing the world the unexpected places that can be accessed by aircraft. The stops will include cities, remote airstrips, national parks, and potentially some off-airport landing sites. Camping will be a huge part of their adventure.

Their final destination is Talkeetna, Alaska – a small town where Dudley has a summer job, working with Talkeetna Air Taxi. It was here, on year ago, that he purchased his Scout.

The Scout had been flying in Alaska with the National Park Service, but when it started making metal in the engine, the craft was auctioned off on a government website.

Dudley bought the plane and hauled it back to Talkeetna, where he spent the summer working on the engine between flights, culminating in a complete overhaul.

“At the end of the summer I had 11 hours on it,” he recalled. “My dad came out and flew it home to Florida with me. That was my first trip from Alaska to the Lower 48.”

Brewer, who has been a pilot since 1981, also owns his own aircraft. Well actually, he owns two! Brewer is a partner in an Aeronca Champ, but is looking to sell it due to his recent purchase of a Glastar.

The two have been friends for about four years and they plan to upload a video after every leg of the flight. They pair are using footage from a GoPro Hero 4, both of their iPhones and a regular camera which shoots both video & stills.

“We hope that friends, family, other aviators, and travelers will stay connected with us along the way by subscribing to our YouTube channel, Aviation Overland Adventures,” Brewer hoped, noting that his students at St. Augustine High School plan to follow their journey.

“We hope to expose general aviation to more of the population so they can see how diverse it is, what it has to offer, and hopefully get some more people involved,” he said. “Also, just to record it for ourselves, kind of like a scrapbook.”

If you’ve ever dreamed of embarking on a similar journey – we can help you find your perfect plane! Our huge inventory of used aircraft offers a wide variety of choices for even the most demanding buyers. Our full-time sales team can help you find the right plane for your needs at a price you’re comfortable with. Call us today at 757-724-6047 to see how we can help get you up in the air!