On March 21, 2020, the Indianapolis Air Route Traffic Control Center was running on lowered capacity due to some positive COVID-19 tests. With fewer sectors in operation, and fewer controllers watching more planes, things were pretty chaotic. A NATCA news release said, “Traffic levels were still high. The closure of much of ZID’s airspace forced controllers to work on the fly and join together to come up with plans and make them work. There were re-routes around closed airspace, aircraft in Area 2 that are usually not worked in that lower altitude airspace (23,000 feet and below), and other situations that were not planned for.”

A pilot flying a Cessna 172 took off from Prestonsburg, Kentucky and was headed toward Lexington while he was talking to a controller named Bob Obma. He began to notice icing, and the mountainous area prevented descent below 3,100 feet which wasn’t low enough to melt the ice. Luckily, Obma is an experienced pilot who knew how to deal with the struggle the Cessna pilot was going through. Brittany Jones joined Obma’s side as a data controller to assist as the situation progressed. Obma later remarked that, ‘Her sitting down was the game changer in that situation.’ Jones knew, ‘Not only is the pilot’s workload huge at this point, but Bob’s workload is dramatically increasing at this point as well.’” 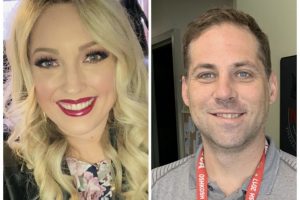 Both Obma and Jones knew it was an immediate need for the aircraft to land as soon as possible. What was only a 10 to 15 minute ordeal felt like an eternity. Jones knew that Morehead-Rowan County Airport was nearby Lexington ATCT (KLEX) approach control airspace. “She called them for information including wind and weather conditions to determine the best approach for the pilot to fly into the non-controlled airport. She amended the flight plan with the new destination and pulled up the approach plate for Obma to read to the pilot.” Jones even had her ATC supervisor call the Morehead airport to ensure the runway lights were on the brightest intensity so ensure the pilot would see it. Both controllers were holding their breath, waiting for a sign.

After what felt like forever, the pilot called  ZID Area 2 supervisor Aaron Stone after landing to express his extreme gratitude. Stone said he could hear loud noises in the background, and the pilot chuckled that it was the ice falling off of his aircraft. Jones later said, “to come in and be helping to basically save someone’s life and be sure they get on the ground safely in these adverse weather conditions, yeah I would say it was definitely one of the most memorable days.” This incredible collaborative effort between Obma and Jones is the third award-winning flight assist for ZID in the past three years.

Norfolk Aviation is your trusted source for the latest in aviation news and brokerage! Thinking of buying or selling? Our dedicated team of experts are here to help you! Contact us today to get started!