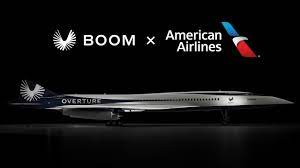 The world’s largest airline, American Airlines, has partnered with new aircraft manufacturer Boom Supersonic and placed an order for the largest number of supersonic passenger jets by any airline world-wide. The deposit for 20 Overture model aircraft, and an option for an additional 40, rockets American into the spotlight amongst U.S. carriers, such as United Airlines, looking to break into supersonic passenger air travel. This partnership marks the beginning of a new age in the airline industry.

The Overture is designed to carry between 65 and 80 passengers at speeds up to Mach 1.7. Like the famous Concorde, these speeds will only be achieved over water due to federal regulations so domestic routes will not be practical nor economical. With a range of 4,250 nautical miles, the Overture has been designed with over 600 specific routes in mind including Miami to London in 5 hours or Los Angeles to Honolulu in 3 hours. This reduces current travel times by nearly 50%. The largest challenges for the Overture will be public perception and private aviation. Due to the failure of the Concorde program, public trust in supersonic passenger travel has dwindled. Fear of accidents, cost, and noise pollution are just a few of the hurdles that Boom and the airlines will have to overcome if they are going to be successful. Despite the reduced travel times associated with supersonic travel, it is possible that private aviation may still be the transportation method of choice for many. This is because private aviation does not adhere to a specific airline schedule including departure time, destination airport, and TSA restrictions. As a result, many travelling for business or leisure may still choose to fly themselves over taking supersonic transport. 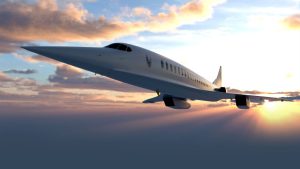 An additional benefit of Boom’s Overture program is the low environmental impact when compared to the current airline fleet. Boom intends for the Overture to have net-zero carbon emissions – meaning that they will offset the aircraft’s total carbon output. They plan to do this through their LEED-certified production facility that generates its own clean energy, using a sustainable aviation fuel (SAF) that is 80% waste animal fats, and an investment in recycling old or unusable aircraft parts. As a result of these efforts, Boom may attract the attention of those not only looking for a quicker alternative to traditional air travel but also travelers who are concerned with the environmental footprint of the current airline fleet. Boom announced back in July of 2022 that the Overture prototype will roll out in 2025. They are projecting that the first passenger test flight will take place sometime in 2029. When or even will the aircraft be fully operational in airline fleets? That answer is yet to be determined as there are several factors that could delay or cancel the venture entirely. Until that day comes, general aviation is still the premier method of transport for business and leisure when compared to airline travel. Norfolk Aviation can help you find the aircraft that suits your needs! Give us a call at 757-724-6047 or visit our website www.NorfolkAviation.com.